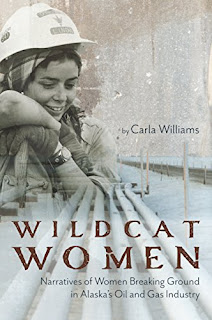 Today I’m sitting down with newly published author Carla Williams to talk about her book, Wildcat Women: Narratives of Women Breaking Ground in Alaska’s Oil and Gas Industry. That’s quite a mouthful and very intriguing. Let’s find out more about it.

MJB: Can you give us a brief overview of the book?

CW: Thank you, Melissa, for interviewing me about my book. It’s an honor. The book includes narratives of fourteen women who worked on the Trans-Alaska Pipeline and satellite oilfields in Alaska in the 1970s, 80s, 90s, and even in recent years. My own recollections are also discussed. It is the first book written about oilfield women in Alaska.

MJB: It sounds fascinating. What prompted you to write about such an obscure and unknown part of our history? What was the inspiration behind it? And do you have any connection to any of these women?

CW: Yes, it was super fascinating to interview the women and hear their stories. I also worked on Alaska’s North Slope oil fields, and even though my camp durations were shorter than the fourteen women, I could relate to what they said. Male authors who have books about Alaska’s oil and gas industry did not understand what women went through day-to-day, so, of course, the female experience was represented differently in their books. I wanted to add more detail to what these male authors wrote about.

I worked with five of the women, but the others I knew only slightly or had never met. 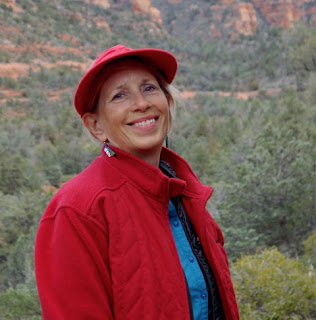 MJB: What kind of research did you have to do?

CW: I gathered information from the University of Alaska library in Fairbanks where I rummaged through boxes of archived materials that had not been cataloged yet. I had some of my own reference materials, but I also found information on the internet, even though a lot of that information never made it into the book. I would read something, then try to figure out if the material was relevant to my book and if it was interesting enough. I went down a lot of rabbit holes, but I enjoyed the research. I didn’t want to bore people before they got to the book’s interview section, yet I thought it was important for people to understand the background of Alaska’s oil development, so I researched the accuracy of those sections as thoroughly as possible.

MJB:  I think that's very often the case with research: we may do more than we need, but even if it's not used directly in the writing, it still informs the writing.

With the #MeToo movement that’s currently going on, did you find any parallels with these women fighting for a place in a “man’s world”? Were there instances of discrimination, bullying, abuse?

CW: Yes, there are parallels, but there are also differences. For example, women working through the unions earned the same wages as the men, so many women working on the Trans-Alaska Pipeline received equal pay for equal work. Discrimination occurred by withholding promotions and stereotyping physical abilities. Bullying and abuse were not tolerated. Managers had hard deadlines and to meet those deadlines everyone had to work as efficiently as possible and that meant working together. Managers in that environment were often union guys that made people toe-the-line with just their presence. The oilfield land back then was private property and still is today, so managers could send a person on the first plane out and ban them from setting foot on the property again. People respected that authority. People didn’t want to lose their lucrative paying jobs.

MJB:  Aside from the gender issue, what kind of dangers and challenges did these woman face just in the normal course of their work?

CW: Most dangers were no different from what the men faced. There was the extremely cold weather and the entire area was under constant construction, so workers looked after each other. Since people worked so many weeks together in close quarters, they became more like a family, so they treated each other like family. However, some women who arrived early in the 70s faced remarkable challenges. When one woman asked where she could go to the bathroom, her foreman handed her a bucket with a lid and it was no joke. She carried the bucket back to camp on the bus to empty. It was obviously humiliating, but if she wanted to continue working, that’s what she had to do. Women improvised and just muscled their way through the obstacles.

MJB:  I recently vacationed in Alaska and the landscape is monumental. What extra challenges did these women have to deal with in this remote location?

CW: Loneliness was a challenge for some women, especially supervisors and managers who couldn’t fraternize with the crews. In the book, it’s mentioned a couple time where women did not feel comfortable going to the dining room to eat. If they walked into the dining room, 300 to 400 men would turn their heads in unison to stare. The first time it happened to me, I felt uncomfortable, but I kept going to the dining room and they eventually got used to me showing up. So, some women ate in their rooms and thus missed the camaraderie at meals. Privacy was another challenge. Having different roommates was disorienting. Some were respectful of space and some were tolerable. Camp bathrooms didn’t provide much privacy. Construction camp rooms were sometimes extremely hot or cold and so sleeping was a challenge. Ice and wind-blown snow blocked the small windows most of the year, but it really didn’t matter, because the North Slope is dark for six months a year, which is rough on the spirit. For many years, women’s Arctic clothing was nonexistent, so we wore boy sizes or just walked around in oversized clothing that we duct-taped to fit.

MJB:  I think of myself as being fairly adventurous, yet I don’t think I could ever have taken on a career like this. What might prompt a woman to do this sort of work?

CW: I think once the book is read in its entirety, a person understands the motivation for women. Yes, money was a huge motivator, but there were other reasons.

MJB:  Do you have a favorite story out of all of those in your book?

CW: One of the reasons why I finished the book (it took eighteen years) and didn’t just remain sitting in my closet forever was because the stories are all interesting. I know how difficult it was for the women to talk about their experiences. It’s so personal and sharing with the world is not easy. Each interview has a different personality. I’ve read them many times, and I still love to read them. They make me laugh and make me proud. Of course, I edited ad nauseum for redundancy, but the final versions I think are fresh and unique.

I always laugh when I read Katie Cotten’s interview. Her written voice sparkles and vivid images pop out of her words. And, I am always amazed at Irene Bartee and how she manipulated the most powerful men in Alaska…she chewed them up and had them for dinner. For a short time, I worked with Irene on the North Slope Contractor’s Association, and I thought she was one of the most interesting people I had met in my life, so confident and intelligent. Her smoky voice was mesmerizing, like hypnotism. The final interview of Samantha George, which occurred in 2015, is interesting because of the dichotomy of her not really having many obstacles, but at the same time, she had met only one female electrician on the North Slope working in her field. How could that be…in 2015? Debora Strutz’s interview pulls at the heartstrings. Readers feel her emotion and the way she intertwines Alaska Native Inupiat culture into her piece is fascinating. I could say something unique about each of the interviews.

MJB:  What kind of inspiration are these stories to you? Did writing this book, and getting intimately involved in the stories, change your own perspective or world view?

CW: When I interviewed the women, many over 18 years ago, I immediately recognized the interviewees were special. I knew I had a solid book, even back then. However, as time passed, the inspiration grew even stronger. Many women I interviewed felt their story was not worth telling at the time and asked me why I wanted to interview them for a book. Most started the interview saying they really didn’t have much to talk about…they just worked on the North Slope and that was it. In the book, I quote Velma Wallis, an Athabascan author, who says in her book, Raising Ourselves, “How can you write about the storm if you are still in it?” Maybe the women felt they were still recovering from the storm and needed more years to reflect. My goal was to get their stories on tape before they passed away or forgot over time. Two of the women passed away just a few years after my interview, Irene Bartee and Norma Smith, so I was happy I got their recollections.

Nobody back in the early days thought they were breaking norms or were special. We were all trying to survive and make money. In Alaska, at that time, a person could be a bank president if they wanted. Old money in Alaska really didn’t exist like it did in the Lower 48. There were a couple of old families around, but opportunities seemed limitless. It was very inspiring to people who maybe didn’t have a college education or grew up in poverty. They saw the opportunities and grabbed them. It wasn’t that hard, so it seemed normal.

Today, with the #MeToo movement, I think both women and men have different perspectives on pioneering women, whether it’s in the movie business or the oil and gas industry. Spoken words from women are important to a civil society and the words we use to describe experiences can spark not only our own inspiration, but others as well. The ordinary woman has had centuries of having her voice shut down or belittled. I wanted to celebrate the woman’s voice. I wanted to tell about how women worked in 50 below zero weather and about how they thought of themselves and what made them laugh inside. I wanted young women to understand that equal pay for equal work could be the norm today and it’s worth fighting for.

MJB: If readers want to find out more about you, how can they do that?

CW: There are two pages about me in the “About the Author” section of the book.

MJB: And if readers want to contact you, how do they do that?

CW: People can contact me through my publisher, the University of Alaska Press.

Posted by Melissa Bowersock at 1:00 AM