I’ve just started writing a new book. I’ve had the main idea swimming around in my brain for a month or two, but just in the past couple weeks have I put together some research that is vital to the story, plus some ideas of who the main characters are and what the arc of their story will be. So far I’ve got a couple thousand words down, and within that short period of time, I’ve changed several characters names two or three times.
I love this phase of writing. I love naming my characters. At this point, I will happily, almost giddily, watch the news, a golf tournament, any sports channel with a crawler just so I can peruse the names that flow by. I could very literally sit down and read a phone book for a couple hours and be happy as a clam. For a woman who’s never been pregnant, I have an obscene number of baby name books.
Mahan, Riggs, Spieth, Charleston, Wertzel, Howland, Grogan. I love playing with the names. I test out several for each character, some monosyllabic, some polysyllabic. Why does the number of syllables matter? Let’s play a game. What sounds better?
Rhett Smith
Rhett Butler
Rhett Farthington
Of course we’re all going to recognize Rhett Butler and most likely that sounds the best to us primarily because that’s the name we know. But note how the various full names roll off the tongue, how we emphasize one syllable over another and how it all works together — or not. A couple books ago, I had a character named Lasta (long story, but it’s in the book). For her last name, I wanted something short and rather harsh to match her difficult life. I finally settled on Beck. Lasta Beck. I liked the punch of the last syllable, the hard edge to it. Lasta Purcell would have softened her name and would not have worked near as well for what I wanted, which leads to another consideration.
The sound of the consonants in the name is important. The name of Severus Snape in the Harry Potter series gives us clues about his personality before we ever see him. The sibilance of the name and the similarity of Snape to snake all work to suggest someone evil, menacing, and manipulative. The shortness of Snape gives it a brittle quality (like snap), as if he might lash out at any time. And of course finding out later that Snape is not the untrustworthy snake-in-the-grass he was made out to be provides tension and revelation later in the series.
Which leads to another point. Do we want the name to reveal something about our character? Or do we want to set up something of a smoke screen? If my main character is a private detective named Rip Bolger or Clash Callahan, we get a certain idea from those tough, manly names. But what if I name him Alfonse Dardanelle? Or Willis Altamonte? It all depends on whether I want to lead the reader toward the real person behind the name or not. If I don’t want to give anything away, I might name him something rather bland — John Carpenter — and let his character develop organically from the story.
Another consideration is if the character’s nationality or heritage is important to the story. If I give my character a last name of O’Neill, Weiss, Gunther, Xi, or Chopra, that might be enough to quickly give a suggestion of the character’s physical or emotional make-up. Again, as above, it could be a clue to the character’s personality — or not. Mixing nationalities — Padraig Nguyen — could actually point up a conflict in the character’s background, or an interesting story about his beginnings. That’s the fun thing about names. They can add a huge amount of depth to our characters and really make them memorable.
I’d love to have you tell me some of the best (and worst) names you’ve used or seen. And in the meantime I’ll leave you with a little game of what might have been in an alternate universe.
So what’s in a name? You tell me.
This article was originally published on Indies Unlimited on June 3, 2014
Posted by Melissa Bowersock at 9:57 AM 2 comments:

Shake Up Your Summer Doldrums

Mid-summer blahs. All the big holiday weekends are gone except one. School looms. Jobs are veering into the no-vacation months. What to do?

How about an unexpected ghost story to shake up your summer? 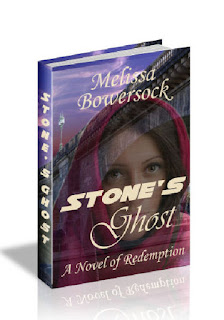 For three days, August 5-7, my e-book Stone's Ghost will be on sale for only 99 cents. I've taken the book out of Kindle Unlimited because it's also available at other outlets, so this is the cheapest you'll find it. If you haven't scooped it up yet, now's the time.