In case you haven't heard, Amazon has announced a new promotional tool for authors enrolled in their Kindle Select program. It's called the Kindle Countdown and it works like this. For four days, you can list your book at a sale price that starts at the lowest point ($.99) and the price then goes up in increments each day until it reaches its normal price. It's all about grabbing the book at the sale price before it goes up.

In  order to kick off the Black Friday-Cyber Monday weekend, I decided to give it a try with my latest book, Stone's Ghost.

Stone's Ghost is a modern ghost story about love and loss and friendship, mistakes and consequences and redemption. Here's the description from the back cover:

Posted by Melissa Bowersock at 7:28 AM 2 comments:

You may remember back in January of this year when I wrote about a writer-friend who was on the brink of having her first novel published. Helping her to reach this milestone has been particularly gratifying because of the story involved. She wrote her book about 20 years ago. Over time, it was accepted by two different traditional publishers, but each time the deal fell through. The first publisher went under and the second reconsidered based on some issues of religious content. I don't know how many other queries she might have sent out, how many rejections she may have received, but all writers know the doldrums that settle in during that time of no forward movement. It becomes a quagmire of depressing self-talk, low self-confidence and hopelessness. It becomes less painful to shove the manuscript into a drawer than it does to continue the quest.

Luckily, her family refused to accept defeat. That's when I was brought in to push things along. I did some light editing, formatted the book for CreateSpace, designed a simple cover with their template and the book was born. Unbeknownst to the author, proof copies were ordered and a surprise party was organized.

Lured to the party location under the guise of celebrating a totally separate accomplishment by someone else, she had no idea of what was to come. I understand that when "the bomb" was dropped, she was completely stunned. She laughed, she cried, wiped her eyes, shook her head, looked at her book again and cried some more. 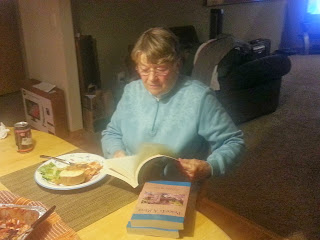 I envy her that feeling. I envy her seeing her own words on paper, bound, for the first time. But I don't envy her the wait she has gone through. This was, quite literally, the culmination of a life's work. She is 83 now; certainly there were times when she thought she would never see this day.

But the day has come. And it was love at first sight.
Posted by Melissa Bowersock at 11:54 AM 2 comments:

Punctuation and Quotes - Rules of the Game

Punctuation and quotes go together like … love and marriage? Not always. Sometimes it’s more like Frankenstein and … Miley Cyrus. 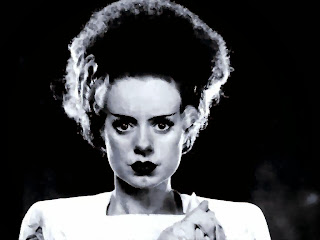 I know, some people find the rules of punctuation to be vastly overrated and too annoying to bother with. Hey, I’m a rule-breaker, too. I protested at peace rallies during the 1960s; I marched and wore love beads and—well, you know. But strangely, when it comes to writing, I’m a Punctuation Nazi. Why? Because it serves the story.
Those rules are there for a reason; they help you convey the interaction of your story clearly to your readers. There’s nothing worse for a reader than having to stop, go back and work to figure out what the writer is saying. You want your reader to stay blissfully immersed in the story, not grumbling unhappily as s/he reads back over the last sentence to tease out your meaning. So in order to serve your story and keep your readers (and me!) happy, here’s a refresher on punctuation and quotes. However, before I start, let me stress that these are the AMERICAN rules for punctuation. More on that later.

1. Periods and commas always go inside quotation marks, whether you’re using double or single quotes.
This is probably the most common mistake made with quotes. I can’t tell you how many times I have sent e-mails to the TV game show Jeopardy! about this, but they continue to use incorrect punctuation. I boil every time I see a clue that says something like this:
This man was Prime Minister of the United Kingdom from 1940 to 1945 and known as the “British Bulldog”.

Argh! The period always goes inside the quote mark. Here are some examples of the correct way to do it.

2. Use double quotes for dialog, then single quotes for quotes within quotes. Note that the period goes inside all quotation marks.
Chad said, "Henry said, ‘We have plenty of time.'"

3. The placement of question marks with quotes really just follows logic. If a question is within quotes, the question mark should also be within the quotes.
Jeff said, “Would you hurry up?”

Chad asked, “Do you agree with the saying, ‘He who hesitates is lost’?”

Even though the main sentence is a question, having a second question mark after the quote is unnecessary.

5. Use quotation marks to set off a direct quotation only.
"When will you be here?" Henry asked.

The above is a direct quote, quoting a speaker verbatim.

Henry asked when you will be there.

This is not a direct quote. It is attributed to another, but not his exact words, so no quotation marks are required.

Now, the caveat I mentioned before is that the UK, Canada and Australia rules can be the exact opposite in rules 1 and 2. Across the pond or across the border, they put the punctuation outside the close quote (as in that Jeopardy! clue that drives me nuts) and they swap quotes on inner dialog--single quotes for the initial dialog, double quotes for the interior dialog. Sometimes. It's not a hard and fast rule. You'll see it both ways.

What's a Punctuation Nazi to do? Consider the source and roll with the punches. As long as the usage is consistent, it should still tell the readers what they need to know.
Posted by Melissa Bowersock at 9:17 AM 5 comments: