The Attack of the Story

So I finished my latest book (Stone's Ghost), had my book launch last month and was eager to start something new, although just exactly what was not clear. I had several ideas floating around in my brain, but none was clamoring loudly for my attention.

Then I had a short conversation with a friend, also a writer. She had told me she was deliberately holding off on reading Stone's Ghost because she was in the middle of her own ghost story and didn't want my book to bleed into hers. Perfectly understandable. She also asked me if I would beta-read hers when it was done, and I readily agreed.

She told me only two things about her story: there were two ghosts, and one was evil.

That evening as I was going about my normal evening activities, my mind kept coming back to that simple premise. Since I knew nothing about the personalities of my friend's ghosts, nor of their agenda, their conflicts, their manifestations, I began to make up my own. I, too, developed two ghosts, a brother and sister based on some people I knew decades ago. I also remembered stories from my teenage years of a friend's experience with a ghost who set fires in the house. Very quickly I had a story line for my ghosts (which I won't reveal here!), and the basis for their conflict that needed resolution.

Then I needed the story line for my contemporary, living characters. My protagonist is a woman this time, struggling a bit with her moody husband. They've just moved to a small town and bought an old house. He's not particularly happy about it, although she loves the house and the area.

Very quickly all the pieces were dropping into place. This is a magical time for a writer, because this kind of story-building is effortless. By asking myself a few simple questions, I had my two parallel story lines; I had the way they intersected; I had the conflicts between the living characters and between the ghosts; I knew how the stories developed, how they evolved and how the tension ramped up. I had secondary characters who would become important, I had the back story that would be revealed in bits and pieces along the way. Rather than working hard at this, it would have been more difficult for me not to figure it all out. This story, very literally, took over my brain all that night.

The next day I was frantically writing down notes as quickly as I could. When a writer is in this mode, you have to act fast, because you don't want to lose a single detail. I worked out a chronology, set down some important dialog, began working on names, places, dates. On the side, I noted what things I needed to look up, research, verify. I pulled up a map of my location so I could talk sensibly about it. I did a Google search for images of Victorian houses so I could be looking at a photo as I described my house.

I also e-mailed my friend and told her I could not beta-read her book until I was done with mine!

Then I began to write.

Just over two weeks later, I'm halfway through Chapter 4. The book is buzzing along. I get held up now and again, pondering the varied directions I can go, but once I sort that out, I'm off to the races again. This is one of those rare times when a book does not need to be cajoled, wheedled, invited, entreated. This is one of those times when the tap is wide open and the story is gushing out. 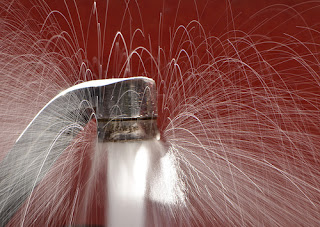 LOVE it when that happens!

So my book launch via the Friendly Ghost Party was a success. There are many ways to calculate success, but the formula I'm using involves lots of people having lots of fun. People posted pics on the Facebook page, posted ghost stories on my blog, and we all had fun reading, commenting, sharing. The virtual buffet was a big hit, especially because the food items were so darn cute and I had links to the recipes. I heard from several people that they were taking notes for upcoming Halloween parties. Trivia questions were asked and answered, prizes were won and awarded; all in all it was a good day.

Book sales? Don't know yet. My book, Stone's Ghost, certainly rose in Amazon's rankings during the day, but I don't have the final sales figures yet. I am assuming the sales were modestly good. I want to thank everyone who bought a book, whether paperback or e-book, for their support and encouragement. I truly hope you enjoyed the book. I think it has become my new favorite. It's a small story and quite subtle, but I think it actually has a very important message.

But enough about the book. I want to talk about all the people who helped me.  Being an indie writer--doing all the writing, editing, formatting, cover design, packaging, marketing--it's easy to feel that I did it all by myself. I did--sort of--but along the way there were many people who lent me their thoughts, suggestions, ideas, advice and support. Without those people, the book would not be the success that it is.

I owe a huge debt of gratitude to my beta-readers. These are the people who read the book first when it was hot off the computer and still had some issues. They are: my husband, Bud (who, halfway through the book turned to me and said, "You're a hell of a good writer!"), Rich Meyer, Bill Hiatt, Lorraine Reguly, Sheryl Falgout, and Joe Harwell. Their sharp eyes, questioning natures and sympathetic spirits helped me polish the book into its final form. No writer wants to hear that there are typos in a book but the little buggers are inevitable and I'd much rather hear it before I publish the book than after! Thank you all for stepping up.

Next I want to thank Brenda at www.coversbydesign.net. When I'm designing my book covers, I generally do some Google searches on images, grab the ones I like, cobble together my idea for the cover, then give the whole mess over to Brenda. She, then, brings my idea to beautiful, legal and high-res perfection. She's a talented artist with good instincts, easy to work with and affordable. I highly recommend her.

I want to thank again all my co-host bloggers who put up posts on party day and kept the roving virtual buffet going: Carol Wyer, Laurie Boris, Yvonne Hertzberger, Carolyn Schriber and Lorraine Reguly. All of these ladies were so supportive throughout the day, checking in, commenting with the visitors, keeping the ball rolling. Their good work left me free to flit around to all the sites as needed during the day. Thank you, ladies!

And finally I want to thank you, all my friends, acquaintances, friends of friends--readers!--for stopping by the party, for participating, for engaging, for joining in the fun. It was a great way to celebrate the new book. This was the first time I've ever done a book launch party, but you all proved to me that the work was worthwhile. I will definitely do it again.

Posted by Melissa Bowersock at 2:40 PM No comments: