If your summer isn't hot enough, let me see if I can help you out with that. For three days only, July 1-3, my book Burning Through is free! Perfect for on-the-beach or by-the-pool reading! 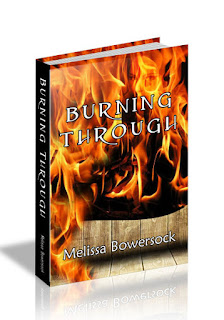 Want to know more? From July 1 to July 3, you can grab a free Kindle copy from Amazon. The book is regularly $4.99, so this is a gonga deal.

A Question of Balance

I’m deathly afraid of heights. Going out on the observation platform on the Space Needle in Seattle, I have to plaster myself to the back wall of the central structure and dig my fingernails into the wall when the wind blows. At the Grand Canyon, I have to stay at least six feet back from the low walls that line the trails; none of this blithe waltzing over to the edge and looking down for me.
So how did I end up on a tightrope?
I’ve discovered that writing is very much like walking a tightrope, placing the feet carefully on the rope itself, hefting a balance beam and making very small corrections to the left or right as necessary. But what, exactly, are we balancing?
The more I write, the more I realize that there are several balancing acts at play in the process. The most obvious and well known is the contrast between planners (or plotters) and pantsers. Planners tend to plot out their stories in great detail, creating long outlines of specifics, managing every nuance of the story before writing. Pantsers (flying by the seat of their pants) tend to start with a few broad ideas and just wing it, letting the story develop organically. Neither way is right or wrong except as it suits the writer, and most writers probably fall somewhere in between the two poles.
But there are other balances as well.
One balance point that’s come up in discussions lately has been writing for self vs. writing for the public. Writers of series, I believe, are much more plugged into their readers and much more aware of the expectations of their fans. Never having written a series, I can’t speak to what that feels like, but I would be happy to hear about it from others. Does that add extra pressure? Or is it more liberating to know what your readers expect and be able to give them that? I write wholly for myself and if I like it, I’m happy, but I wrote one book where a note played a central part in the story. I alluded to the note but never disclosed the full text of it. My publisher insisted I had to rectify that. She reasoned that since the note was so pivotal and was mentioned over and over, I had to reveal the full text or the readers would feel cheated. After some thought, I had to admit she was right, but it was not something I would have arrived at on my own.
Also, I’ve seen more mention in online forums about writing consciously as opposed to letting the subconscious take charge. I think it’s fairly easy to differentiate the two; while we’re sitting poised over the keyboard, ideas percolating in our brains, the ideas that flow logically from one to another are usually the conscious. If our main character is a 30s-something man, then logically he is still working, still building his life. His parents may still be alive; he may or may not be a family man at this point. All these are logical assumptions that stem from our original idea of the character. But if we get ideas from out of the blue that don’t arise logically, those are probably from the subconscious. What if our main character likes to sky-dive? What if he has a natural talent for languages and speaks dozens of them fluently? What if he’s terrified of earwigs?
These are the kinds of ideas that bring us to a balance point. When something like this comes up, do we go with it, lean into it, and see where it takes us? Or do we lean away and dismiss it as silly and not pertinent to the story?
I’ve faced this challenge over and over in my writing. One book in particular seemed to lend itself to this kind of thing, maybe because it was ultimately a spiritual novel.Goddess Rising was unlike any other book I’ve written primarily because I did let the subconscious have free rein. Very often when I sat down to write for the day, I had no idea what I was going to write. Just as often, I would add in developments and then wonder why and what I was going to do with them down the road. The really marvelous thing was when a completely illogical development popped up later on in the book and became useful, even central, to the plot. And it was a huge surprise to me when it did.
If I had confined my inspiration to the logical, the usual and the sensible, serendipitous events like that would never have happened, and the book wouldn’t have been nearly as interesting.
I feel like the overarching balance point (closely associated to the above) is control vs. going with the flow. If the tightrope is our planned story, once we step off the platform and head for that distant end point, how do we get there? Do we grip the balance beam with white-knuckled hands and try to maintain our balance with the smallest amount of sway in the tightrope? Or do we relax into the sway, going with the tightrope as it swings first one way, then the other? Do we try to command the journey through sheer will power, or do we dance across the rope and enjoy the journey as much as the accomplishment of reaching the other side? Or is there a happy medium between the two?
You tell me. How do you balance the aspects of creativity?


This post was originally published by Indies Unlimited on 5/6/2014.
Posted by Melissa Bowersock at 3:58 PM No comments:


Foreword, preface, prologue. We’ve all seen one or the other of these at the front of a book, and many people think they are the same thing. They’re certainly very similar, but there are definite distinctions between them. Do you know what they are?

A foreword is a short introductory statement, especially when written by someone other than the author. It’s not unusual to see the writer of the foreword lauding the author of the main work, or telling a bit about how the work came about or how it came to his/her attention. Note that the definition describes it as a short introductory statement. Usually a foreword is a few paragraphs and less than a page.
The opposite of a foreword is an afterword: a concluding section or commentary or a closing statement.
A preface, conversely, is a preliminary statement by the book’s author or editor, usually setting down its purpose and scope, expressing acknowledgement of assistance from others, etc. Very often we will see an acknowledgment page used for this purpose instead.
A prologue is described as a preliminary discourse, an introductory part of a poem, novel or play. It can be an introductory speech calling attention to the theme of a play, as Shakespeare often did. In Romeo and Juliet, the prologue is as follows:
Two households, both alike in dignity,
In fair Verona, where we lay our scene,
From ancient grudge break to new mutiny,
Where civil blood makes civil hands unclean.
From forth the fatal loins of these two foes
A pair of star-cross’d lovers take their life;
Whose misadventured piteous overthrows
Do with their death bury their parents’ strife.
The fearful passage of their death-mark’d love,
And the continuance of their parents’ rage,
Which, but their children’s end, nought could remove,
Is now the two hours’ traffic of our stage;
The which if you with patient ears attend,
What here shall miss, our toil shall strive to mend.
These days, a prologue like this would likely be regarded as a spoiler, but a subtler version could be used to draw the reader’s attention to a theme or a thread that might otherwise be overlooked amid the action of the story. The prologue will usually hint at what is to follow, and give the reader a sense of the flavor of the story.
The opposite of the prologue is an epilogue: a concluding part of a literary work like a novel, or a speech after the conclusion of a play. This is very often used as a wrap-up, tying up the loose ends or letting the reader know what happened to the characters after the climax of the story. It may pull the entire story together, capturing the theme in a final, brief resolution.
Where a foreword or a preface is not integral to the story, the prologue is. A word of caution here, however. While the prologue may be used to set up the story, beware of using it as an info dump: filling it with names, dates, and relationships that, at this point, mean little to the reader.
Here’s a sample of how NOT to write a prologue:
Blonde and petite Christina Butterfield Warren, a clairvoyant who shares her prophetic powers with her twin brother, Anderson, has been shielded by her parents, George and Regina Warren, for the first sixteen years of her life. Now, however, at their untimely deaths, Christina finds herself at the mercy of her cruel uncle, the Duke of Warrenham. Forced to leave the only home she’s ever known in Nodding Hill, she arrives at Warren Hall in Piddlington where her older cousin Frobisher seems to offer a sympathetic ear. But can she trust anyone in Warren Hall? And does the appearance of the specter of her granny Hawthorne mean madness or truth?
By contrast, the prologue to the original Star Wars gave the viewers just enough information to understand the action that’s taking place and introduced them to one character only. All the other characters were introduced during the unfolding of the story, allowing the viewers to get to know them one by one.
A long time ago, in a galaxy far, far away….
It is a period of civil war. Rebel spaceships, striking from a hidden base, have won their  first victory against the evil Galactic Empire.  During the battle, Rebel spies managed to steal secret plans to the Empire’s ultimate weapon, the Death Star, an armored space station with enough power to destroy an entire planet.
Pursued by the Empire’s sinister agents, Princess Leia races home aboard her starship, custodian of the stolen plans that can save her people and restore freedom to the galaxy…
Prologues, used correctly, can set up a sense of anticipation in the reader, drawing them immediately into the story, making them want more. A prologue that provides too much information too soon, however, can often produce no more than a glazed look in the reader’s eyes and a temptation to move on to more subtle, but infinitely more interesting, stories.
Choose wisely.
This post was originally published by Indies Unlimited on April 29, 2014.
Posted by Melissa Bowersock at 8:48 AM No comments: