Recently I embarked on a new challenge, converting one of my books into an audio book.  I don’t now even recall how I happened to stumble upon the idea; maybe one of the blogs I follow or one of the updates from my many writers’ forums mentioned ACX.com and my investigation took off from there. ACX is an Amazon company much like Create Space in that it provides an easy, affordable way to produce books, in this case audio books rather than physical books. ACX acts rather like a passive agent, creating a neutral middle ground where authors and producers can meet and explore working together. It’s a fairly simple and straightforward process.

I registered information about my book Marcia Gates: Angel of Bataan some months ago. I uploaded the first chapter, the blurb, the cover image, my desire for a female voice and my choices for a working arrangement. There are two ways to pay for a book producer/narrator: one is to pay them up front for their time, estimated to be roughly between $100-200 an hour; the second way is to pay no up-front fees and split the royalties with them 50/50. I chose the latter for several reasons. First, I was not comfortable parting with a large up-front outlay when I was trialing this whole idea for the first time, and it made sense to me that if the producer were to be heavily invested in the success of the book (i.e. royalties), s/he would do his/her utmost to promote it just as I would. 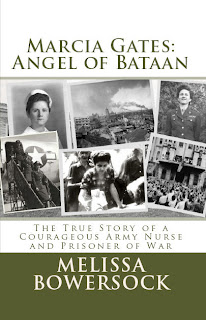 So I put my book up there, went about my other writerly duties and promptly forgot about it.

One of the drawbacks I’ve found to having ten or twenty or fifty irons in the fire at one time is the tendency to lose track of some of them. When I got an e-mail that I had an audition waiting to be reviewed, I was pleasantly surprised. Oh, yeah—audio book!

I logged into ACX and found my dashboard, figured out how to play the audition and listened to the first chapter of my book come alive. It was pretty fascinating; the words, of course, were patently familiar to me, but the tone of voice, the inflection, the emphasis were all new. It was interesting to hear a voice so different than my own read my words in ways that varied slightly from my intended emphasis. That variation was a little jarring at first, but not entirely at odds. I liked her expression, and if it seemed like there was room for improvement, the good news was that I thought her voice was closer to a fit than a definite misfit.

Through ACX, I sent her a message saying I had listened to the audition and I thought we had something going here. Turns out she thought so, too.

This particular book is the biography of my aunt, an army nurse and prisoner-of-war of the Japanese in the Philippines during World War II, and so was a labor of love for me. Imagine my surprise when my producer replied back that she chose my book as a way to honor her father, who had also served in the Philippines! Right away we connected on a very emotional level, and we both felt we could put together a fitting tribute to our families in this joined effort.

Offers sent and accepted, the next milestone was for her to produce a 15-minute sample for my approval. I quickly found out that she and her husband are voice-over actors and have their own sound studio, so producing the sample was all within her means. The fact that her husband was a professional voice, as well, sparked an idea. My book is written in an epistolary style, using copious amounts of letters, newspaper articles and telegrams to tell the story as it unfolded in real time. As the book is told from the point of view of my aunt and her mother, I wanted a primary female voice, yet some of the letters are from men, and a male voice would make a nice contrast in those areas. I asked her if her husband would be up for playing a few “bit parts” in my book. Not only did they readily agree, they even expanded his role and he narrated parts of my father’s autobiography that I had incorporated into my book, as well.

Boy, oh, boy, I thought as I listened to the sample. This is going to be good.

And it will be. We’re now into full-on production. She will upload chapters as she completes them and we’ll chart the progress together. Exciting stuff!

But certainly you didn’t think this story was going to be all rainbows and unicorns, did you?

I was ready for challenges. I was ready to have to reconsider my desires, to not expect or demand perfection, to compromise and adjust my expectations as this singular “mine, mine, all mine” project suddenly became a collaboration.

I was not expecting my brain to get turned sideways.

I listened to the sample the first time with the text in front of me, a red pen at the ready, checking for correct word usage, punctuation, whatever small missteps there might be. But as I listened, it began to dawn on me how many small clues we include in our writing that do not translate to the audio.

It began with the Prologue. I wrote the Prologue, a short background of my pioneer family, from my own first-person point of view as opposed to the impersonal observer’s POV I use in the book itself. On the page, it looks like this:

Marcia Louise Gates rose from a family that was populated by strong women and hard-working men. ….. (quick history here) …. With this for a foundation, it hardly seems surprising that one of them would eventually earn the title of hero.

However, in the audio, all the little visual clues are gone: the em dash in front of my name, even the paragraph breaks. It sounds like this:

My respect for audio book readers just ratcheted up a whole bunch of notches. And I’m extremely grateful that I’ve got a professional helping me with this project.
Posted by Melissa Bowersock at 8:25 AM 7 comments:

How Do You Define Vanity?

A recent post at selfpublishingadvice.org opened up a very interesting discussion on the definition (and merit) of vanity publishing. Vanity publishing in general is paying a publisher to publish your book. It’s the direct opposite of traditional publishing where the publisher pays you, the author, an advance to publish your book, expecting that sales will make up for and then exceed the amount of the advance. (One caveat to this is PublishAmerica, which does not charge to publish your book, but is a vanity scam nonetheless. See http://mjb-wordlovers.blogspot.com/2012/05/vanity-presses.html) At the end of the article, they pose a thought-provoking question:

Is it vanity to write at all? Why doesn’t the musician entertaining the crowd down (at) the pub not get accused of vanity for getting up and playing his music? Why is (it) only writers who are asked to justify their urge to create?

I found that last point extremely interesting; someone who writes their own songs, arranges them and sings them is considered a genius. A writer who does it all is ... ? What? Delusional? Dreaming?

If the process is similar and both are art forms uniquely expressed by the individual, what’s the difference? It occurs to me that there could be two reasons.

I don’t really see how anyone could think this was true. The processes are very similar: cognitive creation in the brain is set down on paper as notes or words, edited and arranged to form pleasing patterns that inspire and evoke emotion. Writing very often is educational, but music can be used that way, as well, as in teaching songs. The way I see it, the end result is a different flavor, but the process is one and the same. The difference is in degree, not kind.

2. There is a difference in the perception of singer/songwriters vs. writers.

This seems to make more sense to me. Just imagine if a friend of ours came to us and said he’d written a song and had arranged all the music and he was going to record it and then shop it around to the local radio stations. I think for most of us, our reaction would be—great! Good luck, wish you all the best, hope you sell a million copies.

Now imagine another friend came and said he had written a novel, had done all the editing himself, the proofing, had designed his own cover and was going to self-publish it. What’s the reaction going to be then?

Uh, you’re doing what? But …, but that’s hard. You need help with that, don’t you? Professional help? Editing? Don’t you need a publisher to help you polish it? Isn’t it really expensive? How many books do you really think you’re going to sell?

So what’s the difference? I’m guessing most people think that writing a book is much, much harder than writing a song. I guess that’s flattering to those of us who do write books, but the flip side is that it seems to be much harder to garner respect and acknowledgement for our accomplishments, especially from people who have never written or published a book and don’t know anything about the process.

Reminds me of the old saying: Those who say something can’t be done should get out of the way of the people who are already doing it.

So next time you hear about someone doing it all in their literary pursuits, how about just giving them a big ol’ attaboy?
Posted by Melissa Bowersock at 2:32 PM 4 comments: