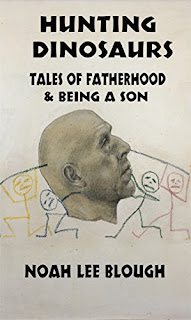 Today I am sitting down with my buddy Noah Blough to talk about his new book, Hunting Dinosaurs: Tales of fatherhood & being a son. I haven’t read the book, but find the description intriguing; you mention both a magical memoir and a fantasy autobiography. What do you mean by that?

NOAH: It’s part of the nature of memory. Every time you “save” on a computer it over-writes what had been done earlier. Science has found the brain does something similar. When working on a memory as a story over a few years, you start to wonder if it’s a memory or Memorex -  the story becoming the memory.  Also, you find new meanings in a memory as you write and re-write, so the story is always evolving. This happened a lot for my childhood memories. In some instances, I combined two memories to make the final story more effective.

MJB: People write memoirs for different reasons, some to record their lives, some to preserve memories for their children, or as therapy to resolve early issues in life. What was the impetus for you to write this?

NOAH: I plead guilty to all three. I really wanted to contrast growing up in the “60’s” with how my sons grew up. I wanted my children to know about me in a deeper way. My older son, who lives in London, is communicating with me much more since he’s read the book. Which is a pleasant surprise. As far as therapy, I got serious about the book when my wife and I went through a rough period. It was a great relief. But if you want to do more than just record some anecdotes, when you dive into your life you are faced with the good, the bad and the grossly stupid. It can make you very uneasy exposing yourself, your life and you ask yourself, “Why am I doing this?”

MJB: It sounds like the process became so much more than you'd anticipated. So, now, would you say you succeeded? Did writing the book accomplish all that you hoped it would? If not, what went unanswered?

NOAH: As far as this being a successful book, I’m letting others tell me. I can’t look at the book without a moment of nausea at present.  I’m not sure, what I wanted to accomplish. Spending 30 years in the film industry I became obsessive about finishing projects (It was also my job). I saw too many give up and that’s not good. Even if it’s terrible, you have to finish the project or it affects the rest of your career, your life. So just finishing and publishing was big. 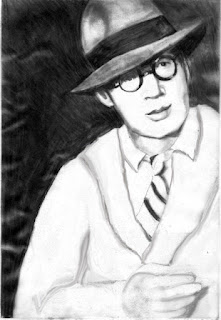 MJB: It is a great accomplishment, one that many never do finish. What would you say was the hardest part about writing this book? What was the easiest?

NOAH: It took me approximately 5 years. There were periods, as long as 6 months, when I didn’t or couldn’t work on it. When I moved to Arizona it became a priority. Yet the hardest parts to write are the parts you need to get to the truth of the story and you just can’t crack it. It’s vexing, but you keep trying or at least get close enough. The easiest is when the story just flows out and it works. Picking out what is going to work in the overall book is tough.  Professionally I’m film editor, and a lot wonderful stories that didn’t fit ended up on the cutting room floor.

MJB: That's actually a good thing for a writer. Sometimes we get so attached to an anecdote, we cram it in when it doesn't belong; the fact that you were able to cut things that didn't fit says a lot about your writer's integrity.

When I write my first draft, I never think of my readers but just write what comes spilling out. Later, going through the book for the second time, that’s when I think about my readers and what they might see or feel as they read the book. When you were writing your book, did you think about your own father reading over your shoulder? Or about your children doing the same? What kind of feedback have you gotten from family?

NOAH: Writing about my father was incredibly hard. Everyone creates a family history, a narrative that they tell friends and acquaintances in an easy relatable way. Not too hard, not too deep, in essence a sound bite. When you write it down, you have to confront the truth, but you have to write it in a 3-dimensional human way. My father was a big personality and had a big life and might have written his own book. Balancing the good and the bad is tricky. He probably would have owned his mistakes and laughed at the rest. Only one son has read it, the younger son is in his last year at college and has no time to read it yet. Through he is a little cranky about his brother getting to read it first. My older son had no objections to my portrayal of him. My daughters will get it this Xmas. Let’s hope they still talk to me in the New Year.

MJB: I'm sure they will. Have you ever thought about making a foray into pure fiction? Perhaps a novel?

NOAH: Yes, fiction would be fun. Before this memoir, that’s all I’d written, but it was always in screenplay form.  Since I’ve joined Toastmasters I’ve written short essays and short stories to perform. I think I’m ready. I joined a writers group and some are published, so I have to get cracking.

MJB: All right, what’s next for Noah Blough?

NOAH: I think I’ve found a voice, so I’m searching for a story that will fits well with that voice.

If readers want more information, how can they find you?

NOAH: I’m just starting to promote the book on social media. I had to put so much time into finishing the book and publishing, I had to back burner everything and it’s taken some time to catch up. All this is in the works. Should be finished soon.

Looking for a cozy mystery to read by the fire on a cold December night? I've got the perfect solution. DEMON WALK, Book 6 of the Lacey Fitzpatrick and Sam Firecloud Mystery Series is now available. All the books in the mystery series are on sale for just 99 cents each to celebrate the release of my latest installment.  If you've been following Sam and Lacey, you'll want to see what happens when they confront pure evil. If you're new to the series, try out the first book, Ghost Walk, for just 99 cents. You won't be disappointed. 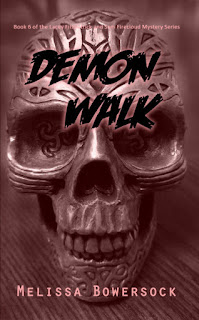 Private investigator Lacey Fitzpatrick and Navajo medium Sam Firecloud are called in by the Director of Mission San Juan Capistrano to unravel the mystery surrounding an evil presence that is threatening the mission’s people and its liability, maybe its very existence. While Lacey digs into the research, Sam pulls out all the stops, planning to fight fire with fire and witchcraft with… witchcraft. Lacey finds his methods disturbing, but knows they have to combat the ancient, supernatural force that has killed before, and may very well kill again.

Catch up on all the adventures of Sam and Lacey in the first 5 books.