Just in time for Memorial Day (and summer reading season), I'm putting my non-fiction book, Marcia Gates: Angel of Bataan on sale for just 99 cents, through May 31. This is the award-winning true story of a courageous Army nurse and prisoner-of-war who just happens to be my aunt. 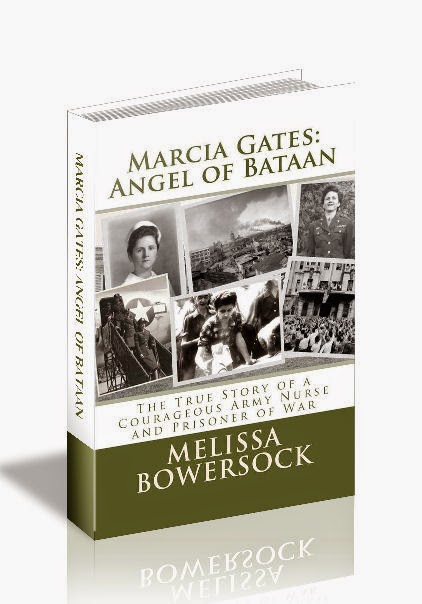 I found the story exciting, surprised by some of the descriptions of conditions and wondered why I hadn't heard this story before. The author has brought out one of the untold stories of World War II--about a nurse. I believe this book will have wide appeal to many audiences including: medical personnel, historians, veterans and anyone interested in good story with a happy ending.--Edward Kelly, Military Writers Society of America

And, if you're planning a driving vacation anytime soon, the audio version of the book brings a new dimension and emotion to the story. Every time I listen to it, I cry.

Some time ago, an article on the Thought Catalog talked about the relationship between writing and mental illness that sparked quite a discussion. My colleague Lynne Cantwell gave a very thoughtful and intelligent response here. For many of us, the most offensive paragraph (of several) in the original article was this:
The common theory for why writers are often depressed is rather basic: writers think a lot and people who think a lot tend to be unhappy. Add to that long periods of isolation and the high levels of narcissism that draws someone to a career like writing, and it seems obvious why they might not be the happiest bunch.
To my mind, this author made many ridiculous and unsubstantiated assumptions, but I’ll confine my response to two of them. Per his paragraph above,
I have a different theory. I believe people write because that is the voice that serves them best. Let me explain this through my own experience.
I was born the youngest of three children and was four years younger than my sister, who was a bully. We shared a bedroom, but I had zero say about what furniture it had or how it was arranged, what stuffed animals I could have on my bed, even what time the light went out at night. All that was dictated by my sister. My parents were unequipped to deal with a bully and unequipped to protect me. I learned early on that if I told on my sister and my parents punished her, I’d only get it worse the next time we were alone. Self-preservation demanded that I keep silent and cope the best way I could, alone. I believe that since I did not have a literal voice growing up, the words I wrote on paper became my true, authentic voice. Whether writing fiction or writing in my journal, this was the most expedient way for me to cope with any problems that I had. Writing was not only my passion, my escape, my solace — it was my salvation.
Going back further, my own father, an artist and a writer, had a stuttering problem. He would adamantly avoid any kind of public speaking, but on paper his voice soared. He wrote articles, essays and eventually his autobiography, giving dramatic voice to all the experience, the lessons, the joy he found in life, all those things he could not easily share with his speaking voice.
I’ve heard from many other writers that they had a similar background — oppressed or ridiculed in some way — and it doesn’t surprise me a bit that they turned to pen and paper to give voice to their real thoughts and feelings. If we, as human beings, are challenged by our surroundings, we have two choices. We can buck the system or we can adapt and mold ourselves into some semblance of whatever our environment requires of us, which may also mean suppressing the truth about who we are. That truth, I believe, must have a vent or it will create its own outlet in unpredictable and sometimes violent ways. Writing (indeed, any form of creativity) will provide that outlet via often secret yet socially acceptable avenues.
At the very least, it sure beats taking out an assault rifle and shooting people.
So are writers mentally ill? Are they narcissistic recluses, lost in depression or alcohol? While there has to be some smattering of that across any demographic, drawing a direct line of cause and effect between writing and those maladies is just plain hogwash.
I would take it the other direction. What if Hemingway or Fitzgerald had not written? Would they have been less depressed, or more? Would Hemingway not have committed suicide? Would Fitzgerald not have been an alcoholic? Although there’s no way to quantify any of this, I would guess their states of mind would have been much worse, not better, if they had not written.
The writers I know are not only coping with life, they are coping well, thank you very much. And they are thriving. The writing itself is a huge part of that.
Originally published by Indies Unlimited on April 3, 2014
Posted by Melissa Bowersock at 4:11 PM No comments:

My first two books were published by a NY house back in the 80s. Both historical (western) romances, they did fairly well, and the publisher put them through several iterations over a course of years. When the publisher finally let them fall out of print and reassigned the rights to me, that's when I first began exploring self-publishing in order to keep the books viable. I reverted back to my original titles for them (the trad-pub titles were typical; each book had "Savage" in the title) and published them myself. Only problem was, the reviews for the originally published titles disappeared. So I am actively looking for reviews in exchange for a free e-copy of my book, Superstition Gold. 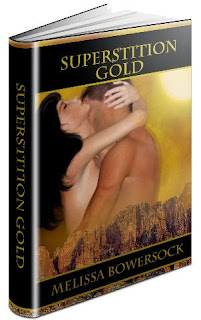 Here's the book description:
Beautiful Leigh Banning travels to the wilds of frontier Arizona in an effort to understand the father she never knew. Her quest leads her to a remote Apache camp in the company of a proud Pima Indian and a handsome cavalry officer. Torn between the two men, Leigh joins forces with the Apaches to battle gold-hungry killers and in the process discovers her true self and her one true love.

If this sounds like something you'd enjoy, please order the book from Smashwords https://www.smashwords.com/books/view/128891 and use coupon code SK75K. You can order whatever your e-book format might be, whether Kindle or Nook or e-pub or...? Every type of e-book file is available. The coupon is good through May 30.

Thanks greatly in advance! Enjoy!
Posted by Melissa Bowersock at 8:27 AM No comments: