The first long weekend of summer is coming up soon--Memorial Day weekend. Are you ready? Got your beach towel, your sunscreen and your summer reading list? Now you can add two books to that list for just 99 cents each.

If you've been following the adventures of paranormal investigators Lacey Fitzpatrick and Sam Firecloud, you know they get the weirdest, most convoluted cases of ghostly manifestations. In the first ten books in the series, they went from Catalina Island to San Clemente, from Los Angeles to Ireland in their quest to free tortured souls. Now, in Books 11 and 12, they continue their mission as implored by their clients. 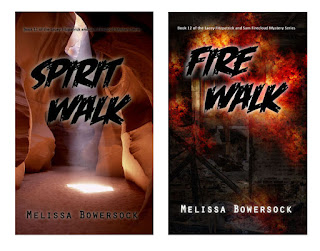 Book 11: Spirit Walk--On the Navajo reservation, a man is found dead at the bottom of a canyon. The tribal police have ruled it an accident. People close to the man don’t believe it, so medium Sam Firecloud and his partner, Lacey Fitzpatrick, are called in to investigate. When Sam’s psychic “walk” confirms the worst fears, the clues lead him and Lacey forward, but the twisted path to the truth turns deadly when it seems the earth itself is trying to kill them.

Book 12: Fire Walk--A property in the town of Meadeview, Massachusetts has a problem with fire. Anything that is built there burns to the ground. Medium Sam Firecloud and his partner, Lacey Fitzpatrick, are called to the small town to investigate the strange physical haunting, and their research leads them deeper into the dark underbelly of the tight knit community. The more they uncover, however, the more the townspeople are threatened by the old secrets—secrets the locals would much rather remain buried.

Now, if you're not familiar with Sam and Lacey, this week is also a good time to get introduced. The first book in the series, Ghost Walk, will be FREE from 5/23 thru 5/27/18. Yup, you read that right: FREE. 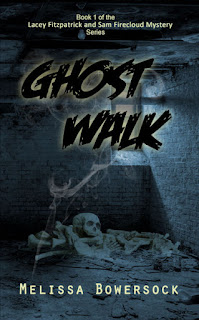 Lacey Fitzpatrick is an ex-LAPD detective with an axe to grind. Tainted by the betrayal of her drug-dealing cop boyfriend, she’s on a quest to prove to herself—and the world—that she’s still a competent crime-fighter. In order to do that, she teams up with Sam Firecloud, a half-Navajo man who communicates with ghosts. With his talent and her research, they tackle troubling unsolved crimes, but their latest case is the toughest. They have to solve a murder—where no record of a murder even exists. Can Sam glean enough information from the victim’s ghost to unravel the mystery, and can Lacey convince the authorities that the murder actually happened?

Come on along and follow Sam and Lacey as they unravel the mysteries!


Posted by Melissa Bowersock at 6:16 PM No comments: 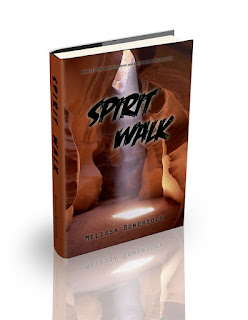 One thing we writers mostly strive for is authenticity. That's at the basis of the old cliche, "write what you know." If we know about something, we can describe it authentically. Of course that doesn't mean we can't write about things beyond our experience, or make up some of our own, but having some firsthand knowledge is definitely helpful.

I'm about ready to release a new book, Book 11 of my Lacey Fitzpatrick and Sam Firecloud Mystery Series. It's called Spirit Walk, and it takes place on the Navajo Reservation, Sam's home territory, and involves a slot canyon.

What the heck's a slot canyon?

If you're not familiar, it's a very narrow, twisty canyon carved through sandstone by ferocious flash flooding during the Southwest's monsoon season. Yes, we do have a monsoon in the Southwest. We actually have two summers, one dry (May, June) and one wet (July, August, September). During the monsoon months, we can easily get a thunderstorm that drops several inches of rain in minutes.

Now imagine all that water gushing down narrow canyons of grainy sandstone. It's sudden, violent, and dangerous. 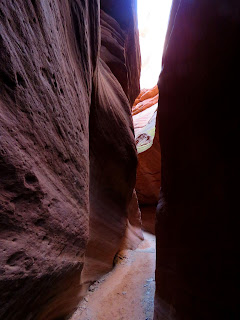 Luckily, the result is beautiful and awe-inspiring.

Recently my husband and I visited one of these slot canyons near Kanab, Utah. It's called Peek-a-Boo Canyon, and it was wonderful. I thought I would share with you some pictures of our adventure, so when you read Spirit Walk, you will be able to "see" the places Sam and Lacey go. 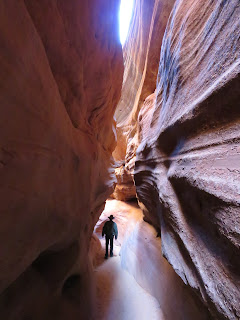 Above, the narrow confines of Peek-a-Boo Canyon beckon at the same time that they challenge.

Left, the author's husband shows the scale of the canyon.

Below, the author hides behind swirls of sandstone. 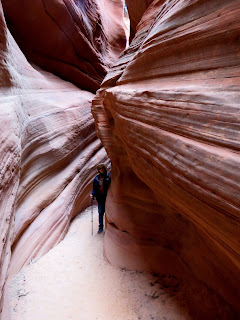 Does it help to know the places you're describing in a book? I think so. Having experienced slot canyons, I can convey to the reader the colors, the tactile sensations, the awe and the power of the place.

Now it's up to you to read Spirit Walk and see if I got it right.

Posted by Melissa Bowersock at 10:48 AM No comments: