Life is messy. Much as most of us like symmetry, life tends more toward the chaotic, the unresolved, the disproportionate—messy. Have you ever have been tail-gated by a jerk that seems intent on ramming your rear bumper one minute, then dashes dangerously around you and speeds off in a spurt of smoke and gravel while you pray for a cop lurking up ahead who will give said jerk the instant karma that he deserves? Have you ever felt that gratifying sense of pleasure when you’ve helped someone unasked—retrieved dropped groceries for a little old lady in the parking lot, grabbed a wayward shopping cart for a frazzled mother with her arms full of cranky baby—only to get back to your own car and find someone keyed the side of it? What’s up with that?

We seem to have an innate sense of balance: good deeds deserve appreciation; bad deeds deserve punishment. Questions deserve answers; chaos requires order. We like things to have balance; we like tit for tat. We like it when loose ends are tied up in nice, neat little bundles.

Not so, life. If karma does exist (and I think it does), it seems to operate on a much larger scale than anything we can discern. More often than not, we do not see the scales dip and rise, then level off in that perfectly symmetrical way. We do not see the jerk get his comeuppance; we do not see the truly generous person rewarded for their giving nature.

So here is the writer’s dilemma: in your story, how little or how much do you tie up the loose ends?

It’s a valid question. If you opt for tying up all the strings into a nice, neat little package, most likely you have imparted a very agreeable sense of satisfaction to your reader. The caveat is that a perfectly resolved story can have an unreal fantasy feeling to it, leaning toward the Disneyesque. If, on the other hand, you opt for a true-to-life feel, you leave some things unresolved and/or dissatisfactory, which can give your reader an uncomfortable, letdown feeling. 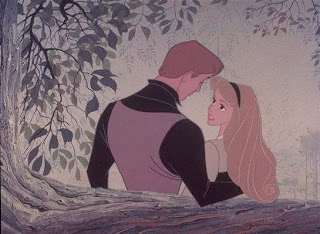 In my current work-in-progress (WIP), I am debating that very thing. The overarching plot concerns my protagonist and his struggle against his own stoic, rather cold nature. Throughout the course of the story, events with his girlfriend and mother shift, he evolves slowly, sometimes painfully, finally reaching the point at which we know he will be able to connect with the people around him in a meaningful way. Along the way, I introduced a side plot that was initially there to add texture and explain my character’s background. What I’ve found is that I actually have the mechanism built into the story that could bring this side plot full circle and resolve another big part of my character’s personality. So now my dilemma is, do I tie it all up neatly? Or let the side plot just hang?

One of my favorite movies mixes these two scenarios into a jarring yet pleasing whole. This is the Clint Eastwood Western Unforgiven. In the movie, Will Munny is a ruthless gunman who gave up that life when he met and married his wife. After her death, struggling to make a go of his rickety pig farm, raising two children alone, he is tempted to return to his old life in order to collect a bounty put on a man who cut up a prostitute. The ensuing battle brings back all the old ruthlessness in spades as Munny cuts down multiple heartless bullies and brings justice (aka vengeance) to the prostitutes. In the end (spoiler alert!), after committing numerous cold-hearted murders, Munny is left alive to return to his home. 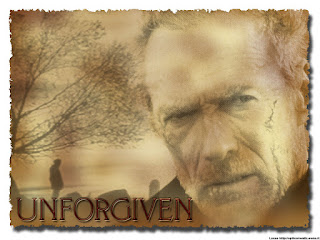 At first I thought this ending was one of those uncomfortable, dissatisfying real-life endings where things do not balance out. After all that Munny had done, it would seem only fair that he die in the end. But the more I thought about it, the more the ending made sense. He had done unspeakable things. He had killed countless men. His death would balance the accounts. The worst punishment he could experience was not dying—it was staying alive. Staying alive to ruminate on all that he had done. Staying alive to mourn his dead wife. Staying alive to think about the redemption that lay beyond his grasp.

But now back to my story  …
Posted by Melissa Bowersock at 8:50 AM 2 comments:

Thanks to Military Writers Society of America!

I want to send a huge shout-out of thanks to the Military Writers Society of America. This is an organization that keeps history alive by reviewing and promoting books about all aspects of military history: fiction and non-fiction, biography, young adult, poetry, even children’s books. The society is well-organized and well run, supported by thousands of members and numerous reviewers. Although they get inundated with requests for reviews, they do a good job of staying current and getting the reviews up online as quickly as possible, and to help potential readers wade through the “stacks,” every year they nominate the best of the books they’ve reviewed in a multitude of categories. Along with the traditional categories of military literature, they also nominate the best books in reference, business, humor, spiritual, romance, memoirs, sci-fi and thriller genres.

I was drawn to the MWSA because my most recent book, Marcia Gates: Angel of Bataan, seemed a good fit. I joined the group and requested a review. I received an immediate e-mail that they were backed up due to the volume of requests, but I appreciated the communication. It was about 4 months before my review came up, but well worth the wait. 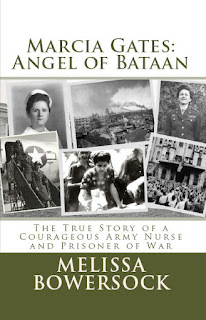 This is the true story of a nurse, Marcia Gates, during World War II and her experiences during the battle of Bataan and three years as a prisoner of war. But it is more than that because this story also relates how the families at home were feeling–frustrated and concerned about their lack of information about Marcia and her safety.

This book is easy to read and many will find it difficult to put down as one wants to know–does Marcia make it home? The format is also augmented by actual letters written by Marcia, other nurses and from family members to Marcia. It may be difficult for some who are so used to the modern e-mail system to even imagine the problems of letters not arriving home for months and how that affected the family who used every resource they could to get any information they could of their daughter. The author uses these letters to carefully weave a true account of what was happening on both sides of the world.

I found the story exciting, surprised by some of the descriptions of conditions and wondered why I hadn’t heard this story before. The author has brought out one of the untold stories of World War II–about a nurse. I believe this book will have wide appeal to many audiences including: medical personnel, historians, veterans and anyone interested in good story with a happy ending. –Edward Kelly

Imagine my surprise, then, when I was notified that my book had also been nominated for Best Biography of the year! I felt deeply honored to have my book placed in such prodigious company. The MWSA has an annual conference (this year in Dayton, Ohio) where they pull out all the stops for their members and authors. The conference offers a multitude of workshops, lectures, one-on-ones with publishing insiders, social activities and the coveted awards ceremony. They also sell books and offer an anthology compounded exclusively for the conference. It’s one-stop shopping for anyone who loves reading and writing about military history in all its guises.
Unfortunately for me, I was unable to attend the conference. I waited on pins and needles for the awards, however.
It was somewhat of a letdown to find out my book did not, in fact, win the gold medal for biographies, but it was gratifying to receive an Honorable Mention. I am sure the voting was done fairly and the books that won the top awards deserved them. And after all, I never suspected that my slim volume of a very personal, family story would ever receive such recognition. It was exciting and encouraging to have my book so honored, even if it didn’t bring home the top prize.
As a writer, I have found that the MWSA does a tremendous job promoting authors and their books. Not only do they review and showcase the books and give prestigious awards to the best, but they continue to support the author long after the conference is over. I continue to get messages about book promotion sites, about bloggers and radio stations wanting to interview authors and other opportunities to get the word out. Unlike many promotional organizations, the MWSA does not simply post a review and then forget it. It actively invests time and effort into keeping its membership in the limelight. Like the servicemen and women represented in the thousands of books, the MWSA never sleeps. It continues to carry the banner of literacy, history, honor and humanity ever forward.
MWSA, I salute you.

Posted by Melissa Bowersock at 11:17 AM 4 comments: