Please, Please -- Write it Down!

I love genealogy. I thought the aptly-named “Who do you think you are?” was the best show ever on television. Watching celebrities that I liked and with whom I felt some connection struggle with their own searches, digging ever deeper into family secrets, family questions and mysteries, was something that I looked forward to all week long. Seeing the awe on Mathew Broderick’s face when he stood on the Civil War battlefield where his great-great grandfather fought; watching Sarah Jessica Parker’s flood of relief when she found out her great-great-grandmother (arrested for witchcraft in Salem) was never brought to trial since the witch trials were shut down as she awaited her turn; seeing the joy on Emmet Smith’s face when  he visited the village in Africa where his forebears lived before being taken as slaves to America—it all serves to keep the history alive. No longer dry facts in dusty books, the history becomes real stories of real people who loved and cried and fought to determine their own destiny.

I didn’t always love genealogy. As has probably happened to a great many people before me, I was plunged into it rather suddenly when both my parents died. Suddenly I was poring through papers and seeing photographs that I had never seen before, wondering who these people were and how they were connected to me. It was immediately overwhelming, inspiring and fascinating.

Luckily for me, I still had an aunt who could help me put some of the pieces together. She could put names to the photos that were blank on the back, and she was able to tell me that my great-grandmother’s maiden name, Keyes, was not pronounced "Keys," but “Kize,” as in “eyes” with a K in front of it. I was lucky to have her for a brief 7 months longer, as she was the last of her generation. Now there is no one left to ask.

Doing my own research from there, I discovered several online sites where people can search for data and assemble family trees. The great thing is that people can share trees, sharing pictures, stories, data and connections back and forth, ensuring that late-comers don’t have to re-invent the wheel as they start their own family investigations. It’s a great community, helpful and supportive and similarly obsessed.

For some reason, there’s a huge sense of satisfaction in adding to the family tree, adding a name, adding the dates of birth and death. But there’s an even greater satisfaction in uncovering the stories between the dates. This is where the real gold lies. I find it fascinating to discover the people who made dangerous and sometimes desperate journeys to find a new beginning. I love reading about people who challenged the odds, who envisioned freedoms and opportunities only dreamed about, who struck out alone or with young families to find a better way. It was amazing to read about my multi-great-grandfather who had been impressed into the English Navy only to find himself at anchor on the east coast of the new America. Not allowed to go ashore, he and a handful of other men devised a plan whereby they requested to be allowed to take a small dory out for exercise. For three days they did this, coming back to the ship each evening until finally, on the fourth day, they rowed directly for the new land and disappeared within it. Changing his name to avoid capture, my forefather plunged deep into the wilds of the new land and built a new life with nothing but his own dogged determination.

The point I want to make is how valuable these stories are. And I don’t just mean the ones from centuries ago. I mean the stories we hear now from fathers, mothers, aunts, grandparents. Every family has them, but they seldom get written down. That’s the tragedy. When the main storyteller passes on, those stories often pass with them. Oh, they’ll be remembered for a few years, maybe retold a few times by the ones who heard them originally, but then they’ll be lost. And that’s a loss not only for the family but for humankind.

Luckily, in this day and age, it doesn’t have to be that way. With computers, it’s easy to write things down, print copies for family, even e-mail them to distant cousins. The stories don’t have to be in any particular format, they don’t have to be in a formal style. Just get the main characters down, the main activity, the places and dates. I know most people find writing difficult, but just jotting down notes is enough, at least for a start. And it could lead to a whole lot more.

The good news is that, with self-publishing options today, family stories can be published as real books for very little money and a little bit of effort. If you’re read my other blogs, you know that you can publish a quality book for just about $10. Yes, $10; I know because I’ve done it.

So this Thanksgiving, when you’re all sitting around the living room enjoying a piece of pumpkin pie and hearing the old family stories, do us all a favor and write them down. Make it a family project and ask everyone to write one story they enjoy. Collect photos to enhance the stories, maybe add newspaper clippings if any exist. You might be pleasantly surprised by the gems you uncover.

And if you’re really inspired, you might end up producing a book that could live on well past the storytellers. You just might find yourself adding to the infinite history of the human race.

How cool is that?

The true story behind my award-winning biography Marcia Gates: Angel of Bataan is being highlighted in a documentary called "Our Wisconsin: A Military History of America's Dairyland." It airs Friday, Nov. 23 from 7-8 p.m. on WKOW-TV in Wisconsin. If you're in the broadcast area, please tune in.

In honor of this recognition, I have posted a giveaway on Goodreads.com; please enter if you would like a free copy of the book. 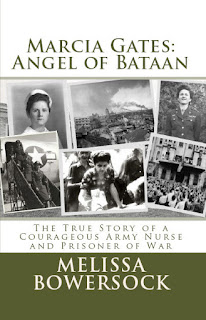 The book was recently awarded an Honorable Mention by the Military Writers Society of America and continues to touch people with its true story of courage and dedication.

Watch the book trailer below or go here.


Posted by Melissa Bowersock at 7:20 AM No comments:

Life Gets In The Way

Like most of us, I have lots and lots of good intentions. I’ve gotten so many thanks and nice comments from other writers about my self-publishing experiences and I strive to keep adding to it but, sometimes, life just gets in the way.

First off, I am planning to retire. Not from writing; just from my day job. It’s still months away, but I have about a zillion ducks to get in a row, so I’ve been chipping away at it. I need to get with the Social Security office and find out what I need to do and exactly when I might expect my first check. I need to investigate alternate health insurance and get that set up. I need to get with my HR department to find out what I need to do there. My boss already knows my plans and at some point we’ll have to advertise my job and arrange time for me to train my replacement. And to make matters really interesting (read: chaotic), my husband and I are planning to move three hours north to a smaller town just as soon as humanly possible.

Amid all this, I am still thinking about my latest WIP, and I occasionally bug out a knotty twist of plot or refine a transition. Sitting down to actually write just seems harder. I guess my brain is just not quiet enough to concentrate on one thing only right now. It’s too used to going in 27 different directions.

Then there’s the election. I don’t normally get too psyched up about elections, but this one seems particularly important. Maybe it’s the polarization of our country over the last 10 years, but it seems that the choices are so diametrically opposed and that the downsides are so potentially worrisome. My father used to say that he really didn’t think it mattered too much who was in the White House; life just seemed to continue on in its own rambling fashion. And I used to think he was probably right, but not since the financial meltdown of the mid-2000’s. Now it seems like it matters desperately who’s in the White House. There’s a part of me that thinks the outcome of this election is a given (with my candidate winning), but there’s also a part of me that is terrified that the other guys might actually steal the election. I try to remain calm but at times the anxiety seems to spike and I’m completely worthless at writing. At those times, the only places that benefit from my talent are Facebook and Twitter. Not exactly the full-length novel I’d prefer.

However, over the decades that I’ve been writing, I have realized that I am a decidedly undisciplined writer, and I’m okay with that. I do not sit down and write at the same time every day. I do not even sit down and write every day. I write when the spirit moves me. I’ve learned that writing at any other time is simply a waste of time, as whatever I end up with is flat and dead and useless to me. So in that respect, I am very disciplined at being undisciplined. I don’t expect to write every day. I don’t even expect to write every week. I know things will calm down, things will simplify, life will get less hectic—and I will write again.

Posted by Melissa Bowersock at 2:22 PM No comments: