Since my buddy Laurie Boris lives on the east coast and I live in the west, I’ve arranged to have my personal jet pick her up and circle us lazily over the country as we chat. We’re in the forward living room, each in a 10-way recliner with a large window so we can watch the world glide by. My crew brings us mimosas and baklava and we’re all set.

First of all, Laurie, tell us about your latest book, Playing Charlie Cool. 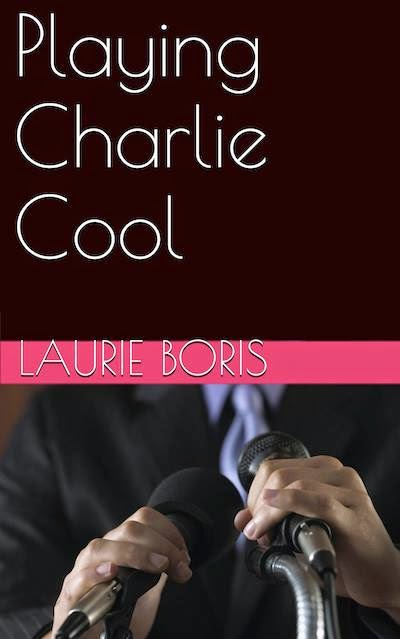 Thanks for the first-class treatment, Melissa! Playing Charlie Cool explores the utter frustration of two men trying to stay together when it feels like the whole world is conniving to drive them apart.

Three months after leaving his wife and coming out to the New York press, Joshua Goldberg, heir-apparent to a political dynasty, is still reluctant to make his relationship with television producer Charlie Trager public. Charlie, a patient man, is trying his hardest to be supportive through an ugly divorce and Joshua’s flirtation with the political spotlight. But there’s only so much Charlie can take and only so long he can sit on the sidelines and watch the man he loves crumble from the strain.

It’s available now for pre-ordering from Amazon and I expect to publish no later than October 8.

There’s an overlap in the characters, but the focus is a little different. Don’t Tell Anyone sets old-school Jewish mother Estelle Trager against Liza, her modern daughter-in-law, when the family discovers the older woman has breast cancer. Liza navigates between husband Adam and brother-in-law Charlie when they all disagree about what’s best for Mom, stirring up old secrets and sibling rivalries. With novella The Picture of Cool and sequel Playing Charlie Cool, we move into Charlie’s perspective, into his life in Manhattan. It’s a sort of sideways trilogy, although Don’t Tell Anyone and Playing Charlie Cool are standalone stories. Liza, who is also Charlie’s best friend, appears in all three books.
Probably the most controversial element in the Cool stories is the fact that the main characters are gay men. I know you’re married and straight, so how did you choose to write about gay men?

Charlie chose me. That’s how it started. He’s such a great character, and ever since he popped up in Don’t Tell Anyone, I’ve wanted to know more about his life and his off-camera attraction to a closeted, married politician. Charlie moved into my writing room, poured a glass of virtual scotch, and started telling a story. I really started resonating with him. With empathy and compassion, I think writers can take on so many types of characters, so many points of view. I’ve also seen the anguish that some friends and acquaintances have gone through, either by denying who they are or telling loved ones who were not accepting. For a long time, I’ve wanted to explore this in fiction, with the right characters and the right story. Not to preach or with an agenda, but just to understand.

What kinds of responses have you gotten from readers about the sexuality of your characters?

I have sensed the silence from some quarters, but on the whole, readers have been very supportive and open. That’s what I try to focus on. One response I loved came from a reviewer who appreciated that Charlie and his friends play basketball. “Yes,” he wrote. “Gay men play sports.”

Great response! Personally, I just want to say that I felt you handled that particular hot potato in a very respectful, realistic and sympathetic way. The characters are mature, thoughtful men who are dealing with personal and career issues as all of us do. They want no more than meaningful work, to be productive and successful in their lives, and to have a loving and supportive family, and I enjoyed reading about them and how they faced their challenges. Good job!

Thank you, Melissa. I’ve enjoyed getting to know these men, meeting their friends and families, and earning their trust. It always astounds me how “real” these characters become when I’m writing them.

My crew is bringing in the 3-course breakfast for us, so while they’re doing that, let’s switch gears. I’d like to talk about editing, which you also do when you’re not writing books. How did you get into the editing business?

Editing came before the fiction writing. I was pretty good at typo hunting; in college I made laundry money proofreading friends’ papers. At my various jobs, I’d become the “last stop” to check for errors before anything went out the door. It felt like a natural progression.

What’s your background and experience in editing?

I have a background in advertising, journalism, and marketing going back decades. When I began writing fiction in the late 1980s, it brought me into a community of writers, and I often critiqued and proofread manuscripts informally for them. After getting laid off from a full-time marketing job in 2005, I moved into freelance writing and editing, gaining more professional experience.

Of the three types of editing (proofreading for typos; copy editing for spelling, grammar, punctuation, etc.; developmental editing for structure, story arc, consistency, character development) do you have a preference for what you’d rather concentrate on?

Although I’ve run the spectrum, my preference at the moment is copyediting. I love the logic of it, that it’s partly rules designed for clarity and partly the art of expression. When I’m at my computer, the Chicago Manual of Style is always within arm’s reach.

If you’re editing a book through all phases (above), how many passes might you make through the entire book? I know when I edit my own work, I have to go through at least once for just formatting, once for typos, once for content. If I try to look at too many things at one time, I get off track and miss things. What’s your process for this?

I go through a manuscript at least twice. Once for content, marking up any small things I find and flagging questions for later. Then a more thorough read for typos, consistency, punctuation, grammar, flow, and to see if those questions I had originally were answered. I read aloud during one of the passes to catch anything that doesn’t sound right. Reading aloud also helps catch errors like misused homophones or missing words. I write up detailed notes. Sometimes, if the edits are extensive, I’ll do a proofreading pass after the author has revised the manuscript.

What are the most common editing mistakes new writers make?

Most of the mistakes I see stem from a writer’s not yet having full confidence in his or her work. That means leaning too hard to make a point; for example, showing that someone is angry via body language and/or dialogue and then STATING that the character is angry. We get it. New writers often overload dialogue tags with adverbs (“she said emphatically”) or pile on the adjectives when they’re not needed. Learning what to pare away comes with experience and with finding a voice. It can also come down to the basics of the craft that we should all know: how to use punctuation, when to use affect/effect and other tricky pairings, for example.

Excellent advice, and I agree totally. I think new writers do tend to go overboard, just because they aren't sure they're getting their point across. With confidence comes economy of words. If a writer were looking for an editor, what should they look for? What questions should they ask the prospective editor?

Try to get a good idea of what kind of editing you’re looking for, first off, and know what the three (sometimes four) levels entail. That could shorten the conversation. If an editor does not know what kind of editing he or she does, odds are you might need to keep shopping. Ask about experience, particularly with your genre. Don’t be afraid to ask questions. You’re making an investment in your writing business and you should be clear about what you’re getting. While it’s not required that the editor be your BFF, a good working relationship is helpful. See how the communication goes. Are you satisfied with the responses? Does that particular editor seem to “get it”? You’ll be working closely together and it helps if your styles are a good fit.

We all have our weaknesses when it comes to writing, and I won’t ask yours, but I’d like to know if, with your experience, do you see yours quickly when you write? Do you recognize your own weaknesses as soon as you set them down, or do you still need (like most of us do) someone else to point them out to you?

Oh, that’s funny. I see some of my weakness when I’m writing. Some, I don’t see until the manuscript sits a while. I’ve written frequently in various blog posts about how our brains trick us into skimming over errors and how hard it is to see your own work objectively. When I submitted Playing Charlie Cool to David Antrobus for copyediting (yes, editors hire editors), I immediately learned that I have a serious “just” problem. Sometimes it really does take a pair of fresh eyes!

Thank you for your hospitality, Melissa, and the baklava!

Thanks so much, Laurie, for all the great advice. We’re just about to land, so it’s time to wrap this up. How can readers connect with you and where can they get your books?

I love hearing from readers! Here are a few places you can find me.


Posted by Melissa Bowersock at 3:17 PM