Most of us writing fiction need to do at least some research. While we're making up characters, making up story lines, we do want the story to be as authentic as possible, ergo research. We may have to research an area, a city, some history. I don't know how many writers enjoy this aspect of our craft; it's not my favorite, but it is a necessity. Sometimes it's boring, or a slog through pages of history that don't apply. But sometimes, it's fun...

Recently I got an idea for a new book in my paranormal series, the Lacey Fitzpatrick and Sam Firecloud Mystery Series. The idea involves the ghost-hunting partners investigating a haunting problem in the tiny town of Jerome, Arizona. Never heard of it? Not to worry; most haven't. It was a mining town in the 1800s, collapsed when the mines ran out, and was barely a ghost town for decades. Then it was rediscovered by the artsy crowd who have now given it a second life. Still tiny by modern standards--the population is roughly 500--it is, however, crowded with... ghosts.

Like any town that existed during the old West days, it had its share of lawlessness, gunfights, murders, suicides and fatal accidents. Added to that, though, were the consequences of being a mining town: cave-ins and explosions, robberies and murders, drugs and alcohol, prostitution and sickness. In 1903, the New York Sun called Jerome the "wickedest town in the west." The decades of being an anything-goes free-for-all resulted in a lot of ghosts. Lots. Of. Ghosts. 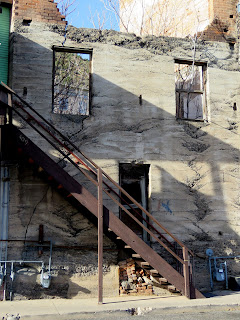 In order to do proper research, I decided I needed to take a Ghost Tour of Jerome. I know; it's a tough job, but some writer's got to do it.

My husband and I joined a small group in Jerome at dusk. It was mid-November and cold as hell. Jerome sits halfway up a mountain and there was a cold wind. Our guide gave us each a flashlight and a "ghost meter," some gadget that measures electrical activity.

We went to several places that have recorded ghostly sightings--the Catholic church, a little park/garden next door, the red light district, what used to be the mortuary, the site of an explosion during the mining days. I took pictures at all of these, but never saw anything unusual in any of my pics. Boo hoo. However, one man (Bob) in our group did. He took a picture down an alleyway next to the old mortuary, and when we all looked at it later, we saw--yes--there was something weird there. 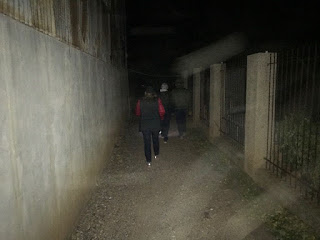 See those light streaks at the bottom of the pic? There was nothing there, at least not in our dimension. And see that broad white swoosh above the columns of the fence? We don't know what that was, but none of us saw it in real time. That's me (silver hair) and my husband (green jacket) walking ahead of Bob's wife, and it looks like the thing flew right over our heads. I was particularly struck at the way the swooshie thing was so blurred, yet the columns of the fence were perfectly sharp and clear. It wasn't as if Bob had moved the camera, and it wasn't any reflection of light. We don't know what it was, but it was interesting to see it show up on the picture.

Interesting enough to spur me on to start my new book. I'm already on Chapter 3, and going great guns. The working title is Bordello Walk. We'll see if that holds.

Meanwhile, the audio version of Ghost Walk is very close to done. We just have a few tweaks to make, then it goes into the production process. I still hope to have it out by Christmas. Stay tuned.

Posted by Melissa Bowersock at 6:00 AM