Today I am happy to interview Michael Brookes, who is making a blog tour to promote his new book. 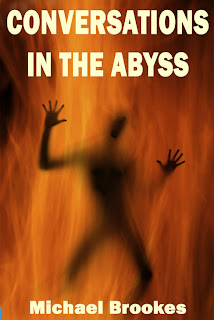 Michael, you’re releasing your latest book, Conversations in the Abyss. Please give us a brief overview of the book and how it relates to your last book, The Cult of Me.

In The Cult of Me we met a man who grew up with the ability to enter people’s minds and bend them to his will. His ability makes him useful to certain factions and he helps a secret church organization kill Lazarus, an immortal attempting to bring about the apocalypse.

He steals Lazarus’s miracle, gaining immortality, but only to discover that the miracle has a harsh price. An eternal fire burns within his flesh. For his crime he is imprisoned within the walls of a monastery. Seeking escape he delves deep inside his own psyche and hides at the border between life and death. There he discovers some of the secrets of the universe.

He also learns that the apocalypse is coming and once again he must stop it.

Your story spans 2 books so far and is poised to have a third. What was your process during the planning? Did you know the story was going to span multiple books, or did you write the first one and then realize you wanted to continue the story?

I knew that the story would span a trilogy, but only a rough idea of what would occur in each book. I conduct an extensive planning process before writing each book. The next one is going to be the trickiest. I have an idea of where it should end, but it might be a bit obvious so I’ll need to think of something different.

Writing about the Apocalyptic destruction of the entire universe seems like a daunting task. What was the inspiration behind your story?

The story is inspired by ‘Paradise Lost.’ For me, John Milton’s book is the greatest story ever told and there are aspects that interest me and made me think of writing a story based on the same events, but with a modern twist.

Your story concerns the classic battle between good and evil, between the forces of God and the forces of Satan. What influence, if any, did your religious background have on your writing?

In the book good and evil isn't quite as clear cut as it first seems. I've always had an interest in theology and religion in general.

Your stories tend to have a dark side to them. What authors and books have had the most influence on your writing?

For horror I think Clive Barker is probably my biggest influence, along with other classic authors like James Herbert. I also read a lot of science fiction, in fact Ian M. Banks is the author of my favourite novel  - Excession.

How would you define “success” for a writer?

For me hearing people reading my books and enjoying them.

What would you like readers to take away with them after reading your books?

I like to think that my stories encourage questions as well as provide entertainment.

You work as a producer for a game development company. Are the creative processes for gaming and writing similar or different? Do you find the two formats complement each other in any way?

There are similarities between the two. It depends greatly on the game, for the latest game we’re working on, Elite: Dangerous, the game is more about the setting than a linear narrative.

What other projects can we expect to see from you in the future, or are already out there?

I have a first draft that I need to work up. I've also been asked to write the official novel for our new game.

I’d like to thank you for hosting this interview and taking part in the blog tour. I’d also like to thank my readers and I hope you continue to find my work worth reading.

How can readers connect with you?

Posted by Melissa Bowersock at 6:10 AM